In the 15th century, the Portuguese established extensive trade relations with West Africa. This commerce essentially involved the same items that the Arabs had purchased: gold, ivory, and slaves. When Portugal, and later other European nations, were finally able to go outside and reach Africa, the transatlantic slave trade started. They began by kidnapping individuals from Africa’s west coast and transporting those they enslaved back to Europe. They sold Africans Indian fabric and European-made products but refused to sell them firearms. It was the second stage of the triangle trade, in which guns, textiles, and wine were sent from Europe to Africa, enslaved people were shipped from Africa to the Americas, and sugar and coffee were shipped from the Americas to Europe.

The triangle trade had a number of significant effects on Europe, notably tremendous profit potential, improved access to raw materials, enhanced political influence and colonialism outside of Europe, and the emergence of the Industrial Revolution. Africans who were sold and worked to death in the Americas and the Caribbean were the genuine victims of this trade. 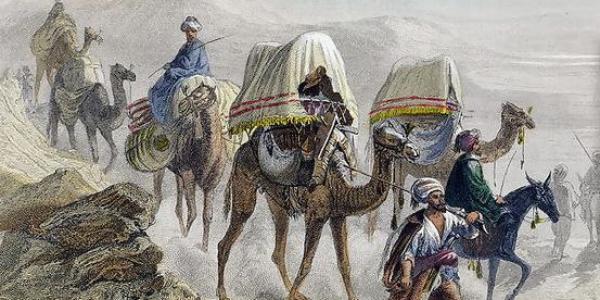 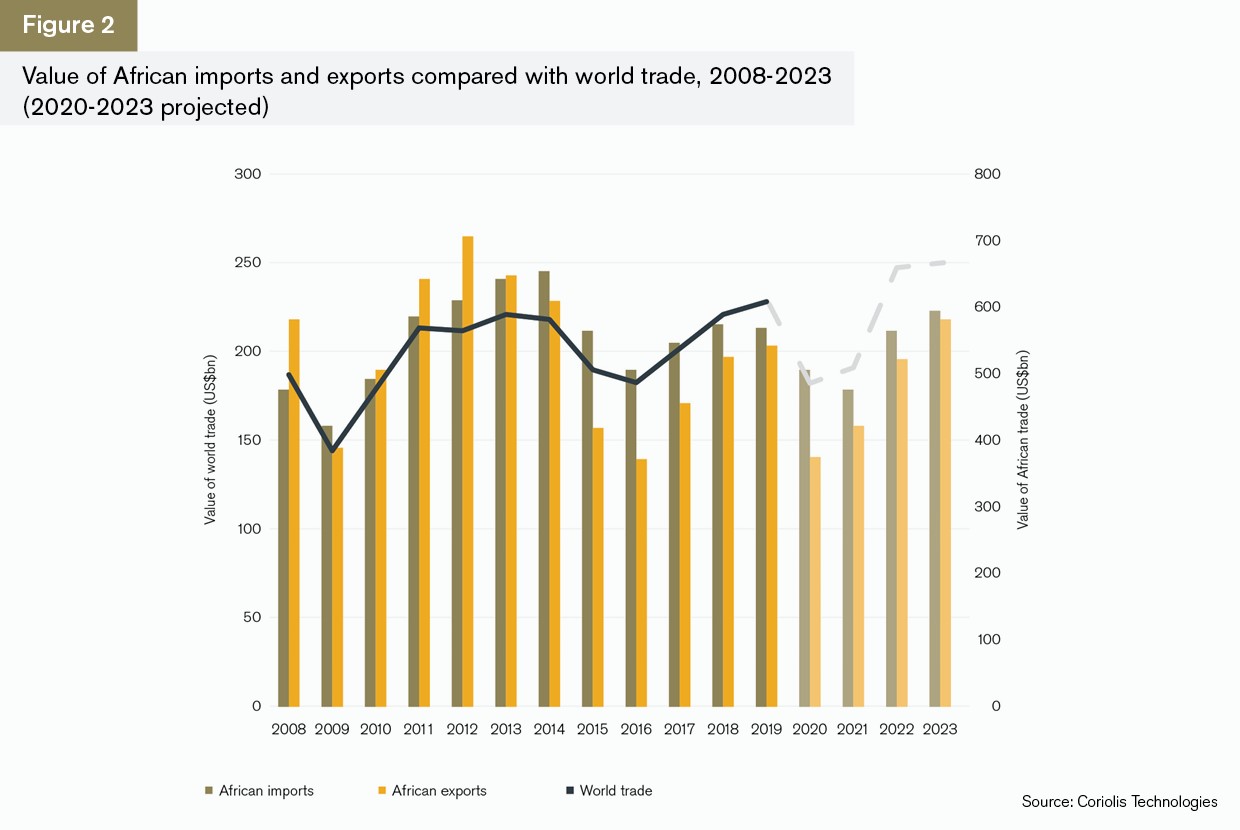 Not only was there pre-colonial trading, but there was also some industry. Traders who deal in the sale of produced goods were present in ancient Africa. The establishment and growth of the West African kingdoms were heavily influenced by trade. These empires were wealthy, strong, and influential in part because they were able to collect levies from traders who crossed their borders. After a while, trade strengthened it. Trade riches was utilized to construct greater empires and civilizations. These empires created strong troops to preserve their trading interests. Empires who sought greater control over commerce built strong forces to extend their jurisdictions and safeguard them from threat.

The importance of trade in economic growth cannot be overstated. Presently, Africa accounts for about 2% of total world exchange, which in itself is difficult to believe given all of their tremendous resources not to mention all of their agrarian products and the fact that Africa still accounts for 2% of total world trade is truly incredible. However, the power of trade is that if Africans could increase their proportion of overall trade from 2% to 3%, that 1% increment would generate about $70 billion in new income for Africa each year, or roughly three times the total development assistance Africa receives from the rest of the world, according to Liser.

Liser, the Assistant United States Trade Representative for African Affairs, stated that the United States needs to collaborate with Sub-Saharan African countries in a variety of areas so that they can fully benefit from AGOA and global trading opportunities, as well as send exports to emerging economies such as China, India, and Brazil. Africans must start trading more with one another. “Africans trade the least with each other of any continent.” It’s steadily improving. We are seeing a rise in intra-African commerce, but it is crucial to note that “you are unlikely to be competitive worldwide if you are not competitive regionally. Unless they open their borders and engage with each other, there will be no degree of competitiveness that will allow them to be big providers of any goods internationally.”

Africa’s contribution in the import apparel industry in the U.S is less than 2%. In example, Liser claims that, depending on the product, Bangladesh sells three to five times the amount of garments to the U.S as all Sub-Saharan African countries combined. “That demonstrates that they have tremendous opportunities, but it is not being realized.” In 2008, U.S imports under AGOA totaled $66.3 billion, with $5.1 billion in non-oil commerce, a sector that she believes the U.S hopes to boost further. Regional integration assists countries in overcoming barriers to the movement of commodities, services, finance, individuals, and innovation.

Fostering additional linkages among African nations is critical for the continent’s economic success, since it promotes large-scale investment by enhancing the accessibility of our economies and lowering risks. Many of the continent’s leaders hoped for regional unity, which fueled the formation of the O.A.U.

Many more institutions have also been formed in Africa’s various areas over the years. However, they accomplished nothing to enhance commerce or other ties among African countries. Many countries continued to have considerable dealings with their former colonial powers. Mr. Amoako argues that for regional integration to work in the face of considerable variety, there is a significant need for “balanced, equitable growth,” so that all economies realize they are eventually gaining out.

Economic integration is divided into five levels: free trade, custom union, common market, economic union, and political union. The African Continental Free Commerce Area was established in 2018, with trade beginning on January 1, 2021. It was founded by the African Continental Free Trade Agreement, which was signed by 54 of the 55 African Union member countries. It aspires to increase Africa’s commercial position in the global market by enhancing Africa’s collective voice and policy space in global trade discussions. The Agreement aspires to gradually remove impediments to intra-African trade by addressing the issue of multiple membership in regional groupings, therefore fostering trade openness and facilitating structural reform.

“The AfCFTA has vast potential to promote economic expansion and alter the bloc’s development prospects if extra steps are adopted to achieve and properly divide its numerous potential advantages,” stated UNCTAD Secretary-General Rebeca Grynspan. It also enhances inter-regional information exchange, which has the potential to boost efficiency, spread new technologies, and redistribute income. It also serves as a boost for the lowest sector of the population and marginalized groups, such as many female employees and young people. Africa’s underexploited export potential is $21.9 billion, representing 43% of intra-African exports, with a further $9.2 billion available from partial import tariffs under the AfCFTA within the next five years. 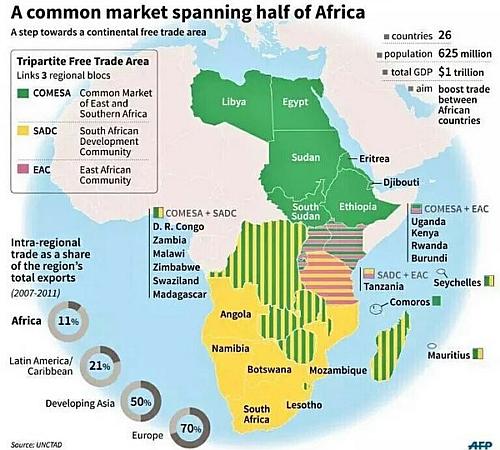 Agenda 2063 of the O.A.U emphasizes the importance of trade in emerging nations and views trade as a powerful engine for economic progress. Trade obstacles in Africa have resulted in a disjointed regional economy, positioning Africa’s role in the global trade market as primarily being a provider of raw materials in exchange for manufactured products, leaving the continent’s stake in global trade minimal. The constraints posed by constantly shifting commodity prices, as well as Africa’s insufficient improvement to its natural resources, make Africa susceptible to external shock resulting from export reliance.

Africa has a real chance to create jobs and promote equitable economic restructuring through local industry and a commodity-based industrialization process, relying on the continent’s resources and possibilities given by changes in global production structure. Exploiting Africa’s industrialization prospects entails adding value to native goods, soft and hard commodities, and building forward and backward links to regional and global value chains.

The African Development Bank’s ambition via Industrialize Africa priority is to help twice the normal industrial GDP by 2025, increasing its industrial GDP to US $1.72 trillion and overall GDP to US $5.6 trillion, primarily by providing the private sector with the mechanism to effectively continue driving the industrialization process on the region.

This would encourage tertiary sector development, lessen Africa’s reliance on commodities, and relate to inclusive growth. Over the following ten years, the Financial institution will support a total investment of $56 billion in the six main industrialization schemes.

The African Union has created continental structures and signature projects aimed at increasing the value of Africa’s commodities, lowering and eliminate obstacles to intra-African trade, and establishing a bigger market for African products and services. The AfCFTA alludes to a continental locale in which commodities and services can circulate freely between AU member states. Its goal is to increase intra-African commerce by developing a clear and mutually advantageous trade agreement among member countries that covers trade in products and services, investment, copyrights, and competition regulation. Other continental paradigms entail Boosting Intra African Trade, which aims to intensify Africa’s trade relations and substantially boost the volume of trade that African countries pursue amongst themselves from recent lows of about 10-13 % to 25 % or more within the next decade, and ”The Action Plan for the Accelerated Industrial Development of Africa”, which intends to galvanize both monetary and non-monetary resources and enhance Africa’s industrial development.

The key themes for consideration span from economic structural changes, regional disparities, and distress to employment, decent work, and non – discrimination, and from technical development, particularly digitization, to social health impacts of climate change. Akinwumi Adesina, President of the African Development Bank, stated that Africa urgently needs to rethink its local economy and add value to all it produces. Exporting basic materials only creates weaknesses, and no government or area has ever thrived solely on the sale of fundamental commodities. We have to get going.