Minerals and Other Natural Resources in Africa

Africa’s economic potential is enormous, and it presents lucrative prospects for global corporations seeking new markets and protracted ventures with high returns. Over the last decade, Africa has been one of the world’s fastest-growing regions, and by 2030, it will be home to roughly 1.7 billion people and $6.7 trillion in consumer and industry expenditure. Increased political stability and regional integration in recent years have made market access simpler, and corporate development will create jobs for women and youngsters, who make up the majority of the population. According to Landry Signé on April 28, 2020, current economic development and poverty-alleviation initiatives would result in more than 43 % of the continent’s inhabitants reaching middle- or upper-class status by 2030.

Since around the year 2000, Africa has seen a surge in extractive commodities. As reported by Landry Signé on Friday, December 3, 2021, significant growth in exports of the region’s vast natural resources spanning from hydrocarbons like oil and natural gas to minerals like gold, copper, and iron ore drastically attributed to the impressive momentum shift in its economic growth trajectory. Africa’s resource-rich countries have risen at a quicker rate than the rest of the continent. The global commodity supercycle, which began in 2000, enhanced extractive output in Africa and heightened investor confidence in the region’s natural resources, resulting in increased resource exploration, a flurry of new finds, and a boom in mine openings. 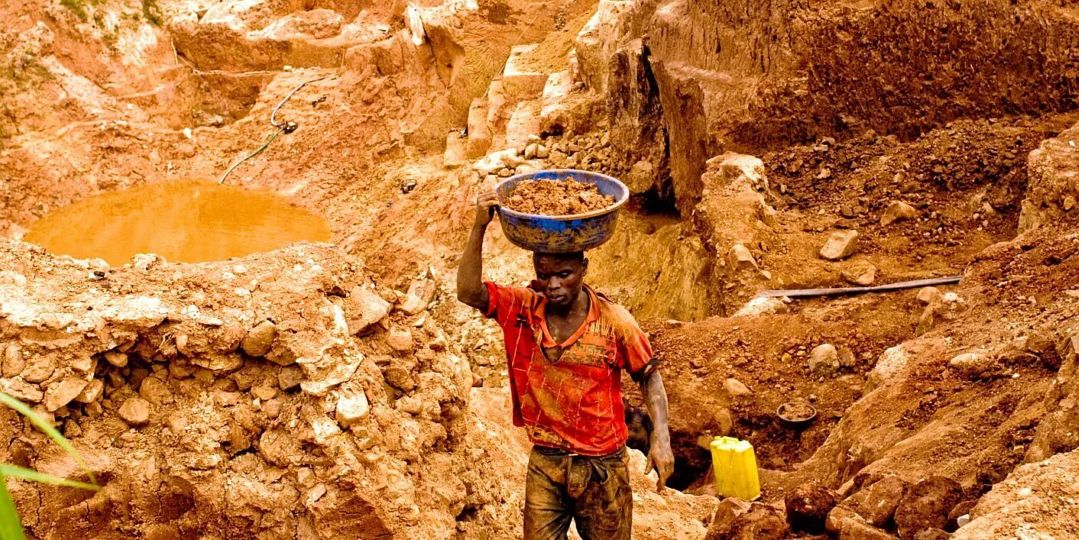 Africa’s mineral resources are a keystream of income. Minerals and fossil fuels contributed more than a third of African exports in 2019. The continent produces over 80% of the world’s platinum, two-thirds of the world’s cobalt, half of the world’s manganese, and a significant quantity of chromium, putting it in a great position to gain from a growing preference for these minerals. Furthermore, some of the world’s greatest undeveloped mineral deposits are estimated to reside in Africa (Signé 2021). 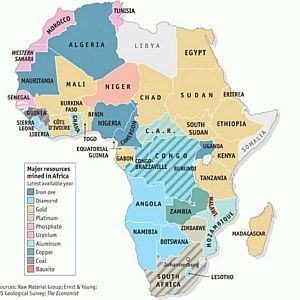 The majority of today’s electronics are made of a variety of minerals, ranging from aluminum to zinc. In 2021, 1.5 billion mobile telephones had been sold worldwide, increasing from 122 million in 2007. Nearly four out of five persons (78%) owned a smartphone by 2020. Mined and semi-processed materials make up more than half of a mobile phone’s components, including electronics, display, battery, and speakers. Lithium and cobalt are two of the most important metals utilized in battery production. The Democratic Republic of the Congo produced around 63 % of the world’s cobalt in 2019.

Another metal utilized in electrical devices is tantalum. Tantalum circuits are used in cellular telephones, laptops, and a wide range of automotive electronics. The DRC and Rwanda are the world’s top tantalum producers. They manufacture half of the tantalum in the world. For 22 of Africa’s 54 countries, petroleum and coal are among the most plentiful resources. Nigeria produced most of the continent’s petroleum (25%) in 2019, followed by Angola (17%) and Algeria (16 %).

Gold, iron, titanium, zinc, and copper are the most commonly mined metals in 11 nations. Ghana produces the most gold on the continent, trailed by South Africa and Mali. Diamonds, gypsum, salt, sulfur, and phosphates were the most important industrial minerals for 13 African countries. Africa’s top industrial diamond production is the Democratic Republic of the Congo, supported by Botswana and South Africa. Botswana is Africa’s leader in the supply of gem-quality diamonds for jewels.

South Africa earns the greatest revenues from its natural resources, generating $125 billion each year. Nigeria is second with $53 billion in annual revenue, trailed by Algeria ($39 billion), Angola ($32 billion), and Libya ($27 billion). The Globe Mining Congress estimates that the world mined 17.9 billion tons of minerals in 2019. Asia was the world’s top exporter, accounting for 59 % of $1.8 trillion in overall output. North America came in second with 16%, trailed by Europe with 7%. Africa generated 5.5 % of the world’s minerals, valued at 406 billion dollars.

The continent stands to gain a lot by banding together and utilizing its immense natural resources to fund the development agenda and achieve greater prosperity. It must guarantee that future growth and resource exploitation are results-oriented, environmentally resilient, and protracted. According to UNEP, the African Ministerial Conference on the Environment (AMCEN) recognizes that natural capital nurtures the continent’s economy, validating that using natural capital as a source of wealth generation and investments will enable actions toward achieving the United Nations 2030 Agenda for Sustainable Development and Sustainable Development Goals (SDGs), as well as the African Union Agenda 2063, through financial, economic, social, and environmental contributions.

Africa is the continent with the highest mineral resources, yet it is still underexplored. According to the African Development Bank, exploration spending in Africa has remained below USD5 per square kilometer, compared to an average of USD65 per sq meter in Canada, Australia, and Latin America (AfDB). Moreover, the majority of minerals mined in Africa are still supplied unprocessed, decreasing their prospective additional value. The majority of this output is exported in its unprocessed state.

According to the African Development Bank, the massive cost of mining in industrialized nations has driven big global firms to look for investment possibilities in Africa, which has lower manufacturing costs. For example, BHP Billiton, the world’s largest mining company, has scrapped roughly USD40 billion worth of projects in Australia, owing to excessive costs, particularly labor-related expenditures. As a result of these expenses, global mining firms have grown their involvement in Africa. BHP Billiton, Rio Tinto, Anglo American, and Xtrata are among the world’s largest enterprises. Currently, more than 200 Australian firms are working on over 650 projects in 37 African nations. The rise of significant Asian mining investors has opened up new avenues for African investors to diversify their portfolios. 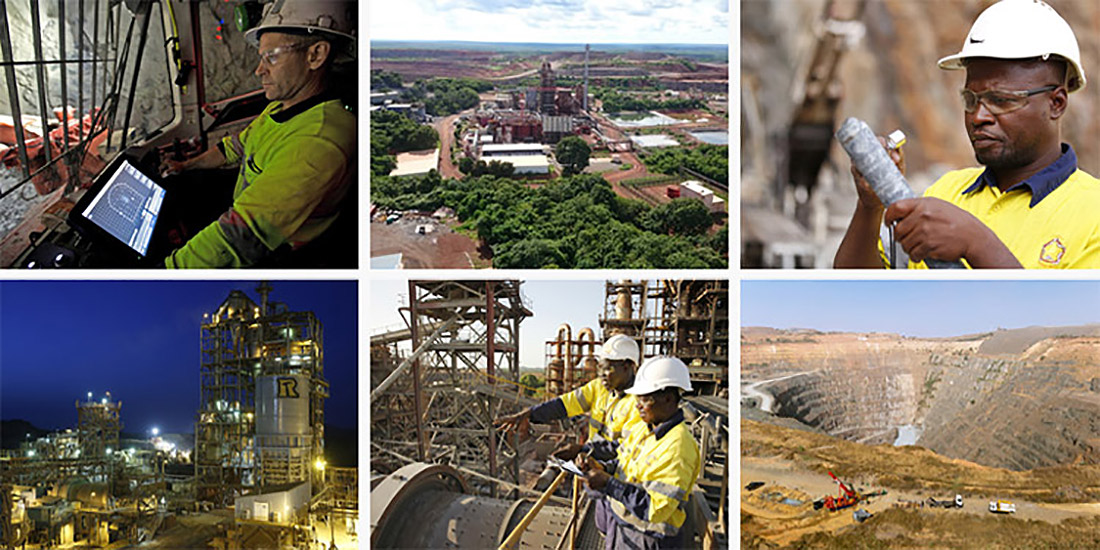 Metal and mineral production is important to several African countries. 24 of Africa’s 54 countries rely on a small number of mineral items to produce more than 75% of their export revenue. External shocks and a low degree of economic growth have been exacerbated in part by this strong reliance on mining rents (AfDB) To minimize communities’ reliance on the mine for employment, mining corporations in Mauritania fund a jewelry manufacturing facility, a brick-making business, and an agricultural cooperative.

The mining industry is already reducing its environmental effect by using efficient renewable-energy systems. Deforestation, land degradation, air pollution, and ecological disturbance have all been linked to mining (UNEP). 4IR technologies that are self-contained contribute to the clean-energy transition by reducing fuel usage in activities including loading, transporting, crushing, and drilling. According to one estimate, autonomous technology might reduce fuel consumption on mining sites by 10-15% (Signé 2021).

Mine performance may also be improved through better data and analytics. Mining firms create massive volumes of data in the course of business operations, but only a handful of them put it to good use. Advanced analytics can enhance mining planning, increase yields, and decrease equipment downtime, therefore this is a huge wasted opportunity. In South Africa, a 30-year-old mine increased mineral recovery by 2% by applying sophisticated analytics to its primary processing processes (Signé 2021). However, improving the quality of mineral products would necessitate luring technology and talents from mature markets.

The Syama mine in Mali, according to Signé, is an example of a location that has profited from digitization. Syama was taken over by Resolute Mining in 2015, and it was developed into the world’s first purpose-built automated mine. Employees oversee and monitor all processes, from clearing the drill point through extraction, loading, and transporting, using a fiber-optic network connected to above-ground control centers. Despite the high initial expenditure, the adjustments are intended to reduce mining costs by 30% and increase overall efficiency. The machines can run for up to 22 hours a day, with no downtime due to shift transitions.

Signé believes that 4IR technologies will shape the mining industry’s future. However, although they provide enormous potential for increasing production, enhancing safety, and reducing mining’s environmental effect, they also pose real concerns. In the absence of educational and training initiatives to reskill employees, many of the new technology-enabled occupations demand qualified workers that the labor market cannot supply. This means that employment possibilities will be restricted. Mining businesses may utilize the income generated by larger margins made possible by the introduction of new technologies to train appropriate staff in AI and machine learning, according to one proposal. A new school curriculum can also educate the IT skills that the future generation will require for 4IR-enabled professions, such as those in mining. 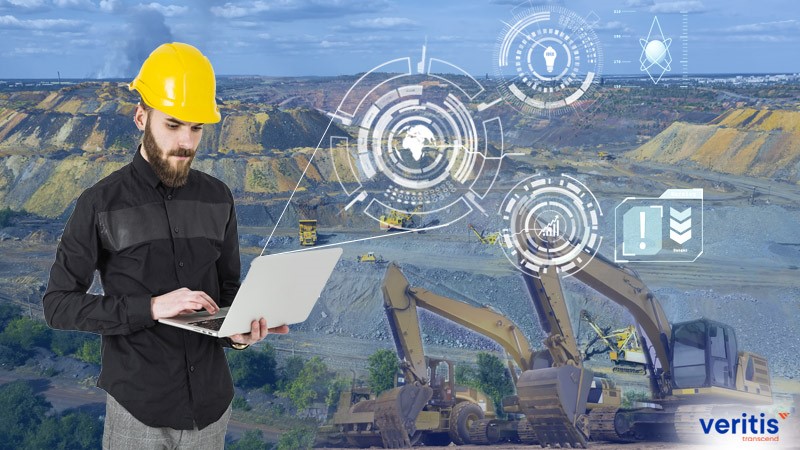 To take advantage of the potential that digitization presents, industry leaders and government must collaborate. Many mining corporations are hesitant to engage in new activities that need a solid regulatory environment because they lack confidence in the African governments’ ability to enforce compliance. Governments must modify this view as a first step. Governments and local communities, after all, profit financially from digitization. National governments will have more cash to invest in infrastructures, such as roads, schools, and health clinics, as mining grows more productive and lucrative.

The success of Africa’s industrialization agenda depends on proactive and intentional government initiatives. Other ways for African nations to promote the industrialization of the mining industry include establishing an industrial foundation through backward and forward linkages and increasing regional integration. More significantly, Africa must employ new solutions by maximizing the potential of public-private partnerships and ensuring that industrial participants adhere to rules that restrict mining’s environmental and social consequences.

The African Growth Bank is now working to help the development of Africa’s mining industry. In recent years, the Bank has increased its efforts to promote the mining industry’s role as a driver for economic progress across the continent.

Mines that embrace digital transformation will boost output, operate more efficiently and effectively, and be more ecologically friendly. They will establish new standards for worker health and safety, and they may help reskill workers through education and training programs. In summary, they will disrupt Africa’s mining industry; nevertheless, if properly exploited, the benefits of digitalization will far exceed the threats.