Commodity price shocks prompted several African governments to take on greater debt to boost economic recession through expansionary fiscal policies, according to analysis. Poor economic management and the disintegration of the industrial and agriculture sectors, on the other hand, resulted in sluggish economic development. Loans were not directed to productive industries, but rather to consumption and non-export-oriented ventures that could not produce money to cover debt service obligations. 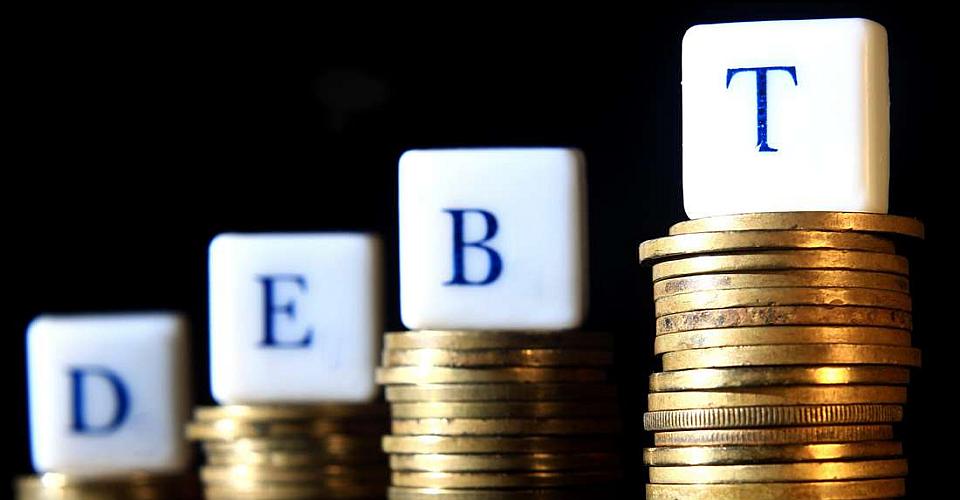 The condition of African countries worsened when, in 1979 and 1980, a second commodities shock triggered a drop in the non-tradable and export sectors. Between 1980 and 1987, Africa’s foreign debt-to-export and debt-to-Gross National Income (GNI) ratios increased by 218 percent and 110 percent, respectively (Adeniran et al., 2018). According to Greene and Khan (1990), the situation for African countries deteriorated further as rising fiscal deficits were accompanied by rising international interest rates and a fall in net capital inflows, rendering many African countries unable to pay their debt servicing commitments.

The quest of fundamental economic reform may be to blame for the current debt levels. Massive infrastructure expenditures, backed by borrowing from both local and international markets, are required to begin structural transformation of Africa’s economy. According to Coulibaly et al., (2019), African countries have had to borrow from a variety of sources to satisfy the increasing needs for infrastructure and other economic programs, including foreign debt markets (Eurobond issuances), domestic economy, multilateral institutions, and Paris and non-Paris Club countries.

The present low global interest rate framework, which forces private markets to seek better paying assets, might also be blamed for Africa’s mounting debt. In response to the global financial crisis of 2007/2008, Western central banks implemented quantitative easing, which resulted in interest rates plummeting to historic lows. Private market lending to various African nations emerged from the hunt for greater rates for private capital in emerging and developing economies outside of industrialized economies. Several African governments have issued Eurobonds to reap the rewards of these non-traditional financing markets.

Other factors, according to Coulibaly et al. (2019), are driving the present debt increase. First, they believe that the global financial crisis and the 2014 terms-of-trade shock contributed to several African nations’ debt ballooning. Second, the devaluation of currencies has resulted in the ballooning of Africa’s debt. They argue that because Africa’s Eurobond debt is predominantly denominated in foreign currency (namely the US dollar), it is not hedged against exchange rate changes, and hence the local currency value of unhedged debt rises as the exchange rate falls. 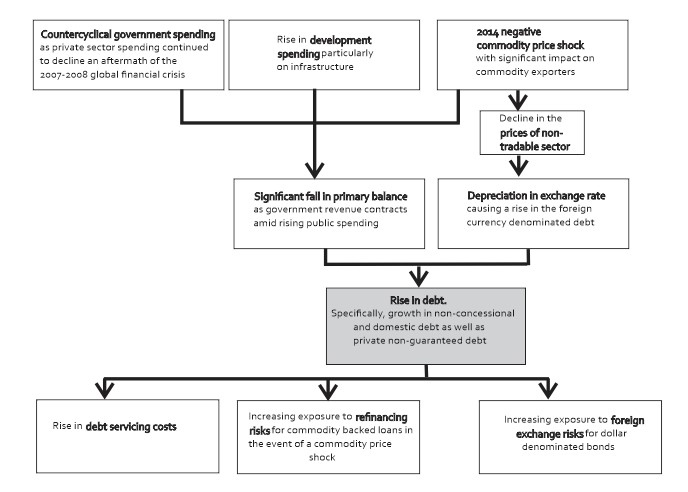 Following the surge in African countries’ debt in recent years, the issue over debt sustainability is gaining steam, particularly among donors, international institutions, and policymakers. The African Development Bank has cautioned that the COVID-19 epidemic has increased the danger of default across the continent, resulting in higher debt loads, deteriorating poverty, and wider inequality.

“The pandemic’s grave scars are still visible and will take time to heal,” said bank President Akinwumi Adesina. He ominously warned that the region must avoid another “lost decade” of progress and growth. “Many more nations will fall into economic crisis if debt forgiveness and restructuring are not implemented,” he said.

The majority of this debt is amassed through Eurobonds issued in foreign currencies on international financial markets. The entire number of Eurobonds launched between 2018 and 2019 surpasses the combined value of all bonds issued throughout 2003 and 2016. According to the African Development Bank, the average debt-to-GDP ratio in Africa is predicted to rise from 60 percent in 2019 to 70 percent, and that number might rise much higher. According to the International Monetary Fund, African nations would require an additional $285 billion in assistance to deal with the pandemic’s consequences until 2025.

African countries are issuing Eurobonds and listing them on established international debt markets, such as the London and Irish Stock Exchanges. If local bond markets were active and liquid, African countries would be less inclined to move abroad. But, except for South Africa, African bond markets remain undeveloped, with inactive and illiquid secondary markets. As a result, attracting overseas investors to participate in local projects is tough. The International Monetary Fund (IMF) believes that African nations are on a Eurobond-issuing binge, with half of them on the verge of default. It claims that African countries are accumulating debt without taking into account the hazards of exchange rate fluctuations and the true costs of debt repayment.

However, the debt alarm being sounded by international debt management bodies, in my opinion, is overblown. The issue is not that African countries borrow too much, but that they pay too much interest on their debt. This can be attributed to a variety of factors, including rating agencies’ lack of knowledge and issuer conduct. Rising interest rates on Africa’s debt are a big source of concern. By adopting high yield curves in their Eurobond Initial Public Offerings, African governments are shortchanging themselves. This unjustly reinforces the impression that they are high-risk issuers.

Several significant variables contribute to the high interest rates. First, there is a mismatch between the short-term composition of the debt that African governments have taken on by issuing Eurobonds and the long-term nature of the infrastructure projects that they want to support with Eurobond proceeds. African governments are being forced to mortgage short-term to fund long-term initiatives due to their insatiable need to entice investors. Second, the fungibility of Eurobond profits – their ability to be used for reasons other than those for which they were issued – subjects the funds to the risks of theft and nonproductive spending on the downside. Third, because several countries have junk credit ratings, they have negative credit ratings. Credit ratings play an important role in determining lending rates and bond appetite.

In and of itself, debt increase is not a negative policy. According to Coulibaly et al. (2019), Africa’s debt has been utilized to encourage consumption and investment. Debt is a valuable instrument for funding projects that promote economic development. Given the scarcity of domestic resources, debt can be employed to smooth out economic volatility via judicious fiscal policy. As a result, the debt must be utilized to fund value-creating economic and social undertakings. Blanchard (2019) argues that because multipliers are stronger, tiny variations in debt have a larger influence on economic output.

In the presence of hysteresis, DeLong and Summers (2012) looked at the relationship between debt and output. They discover that even a little hysteretic impact of a recession on subsequent production can cause a fiscal expansion to cut rather than raise debt in the long term, with the effect becoming bigger as multipliers get higher and the safe interest rate falls. As a result, debt might be the antidote to hysteresis while also addressing unemployment. Furthermore, domestic resources are insufficient to fund public investments during a recession. As a result, capital’s marginal product grows. As a result, countries may turn to debt to fund required public spending.

Because the debt must be serviced in the future, the GDP growth path is the most important factor. Most of the drivers of debt rise, according to Coulibaly et al. (2019), appear to be diminishing. Commodity prices are likely to rise as economic development picks up in areas of Africa, currency rates stabilize or strengthen, and fiscal consolidation takes place (UNECA, 2019). Coulibaly et al. (2019) predict that debt levels will fall to 47 percent by 2023. The World Economic Outlook of the International Monetary Fund (IMF) foresees a decrease in median public debt over the next three years.

According to these forecasts, a sizable amount of the debt is utilized to promote economic growth rather than consumption. Furthermore, Africa’s prospects are bright, which may explain why capital markets are eager to lend to some African governments. It should be remembered that Kenya’s $2 billion bonds was seven times oversubscribed previously. Ghana’s $3 billion bond issue was likewise six times oversubscribed in 2019. On the other hand, research suggests that Africa has significant transportation, energy, health, and education needs, and that debt is a dominant contributor to development financing. With global interest rates at record lows, it appears like Africa is missing out on a golden chance. China looks to be eager to join the game.

Despite its present steady economic growth, Africa really shouldn’t rest on its merits since it is still exposed to a variety of shocks, including commodity price volatility, natural catastrophes, climate change, wars and conflicts, and decreased remittance, aid, and financial flows. This necessitates Africa’s commitment to strong macroeconomic policy. As a result, policy buffers must be maintained to allow for future countercyclical measures, such as cautious fiscal policy and reserve utilization. Strengthening social safety nets is also necessary. To avoid escalating tensions among the public during economic downturns and making shocks more disruptive, social and income disparities must be forcefully addressed.

According to evidence from other regions of the world, if African countries maintain their present economic performance, the fast growth seen previous to the financial meltdown would result in significant structural changes in many countries’ economies. Many African nations have set a goal of becoming middle-income countries during the next decade, as stated in their development plans or strategies. Moving from a low-income to a middle-income country, on the other hand, would necessitate not just an increase in per capita income, but also a structural transformation of economies as an integral aspect of growth. 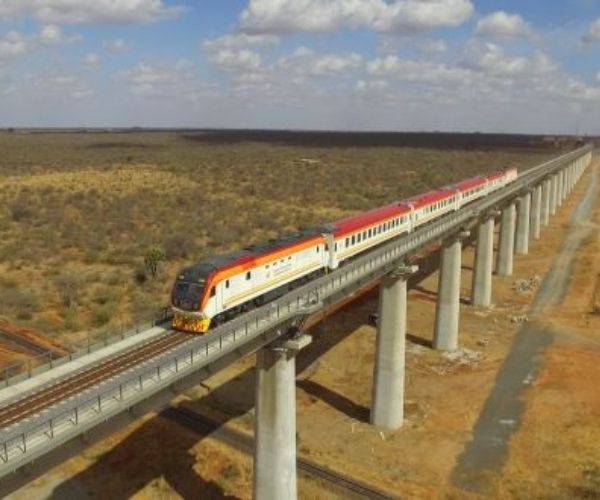 Finally, African governments should utilize the funds obtained to support lucrative initiatives, with the earnings used to repay interest owing. Governments should borrow for constructive purposes and handle revenues from foreign bonds with greater caution, openness, and honesty. They should haggle for competitive loan rates and only accept the best offers. African countries should take a united stance on the continent and embrace international norms and principles to establish lines of accountability in rating agencies. This will provide a framework for enforcing scientific rating methodology, rating appeals, rating agency regulation, and adequate participation of rated nations in the rating process. During the bond structuring stage, African countries must assume control of the bond issue process. They must decide whether or not to accept or reject investment proposals. For African countries, it is critical to arrange bonds with attractive rates and terms. Syndicates of lead-managers, originators, and investment banks should not be completely excluded from this process. Recent Eurobond issuances have been oversubscribed three times on average, demonstrating that demand outweighs supply. To avoid needless expenditures, countries should manage lead issuance advisors to negotiate for the lowest feasible interest rates.